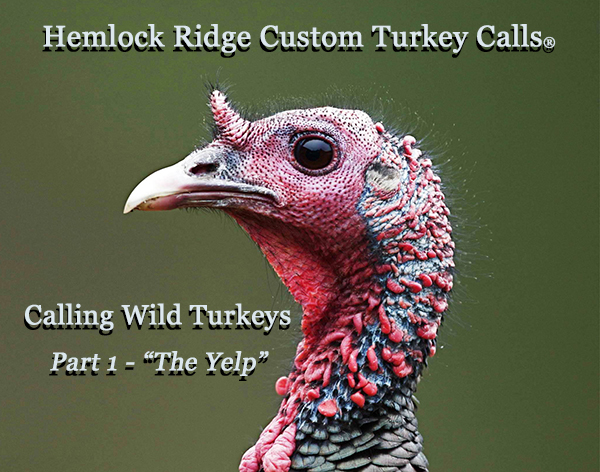 The yelp has been referred to for ages as the “bread and butter” call for the Turkey Hunter Calling Wild Turkeys and for good reason. If you can yelp, you can kill a Turkey. The yelp has two distinct syllables or notes. A high note and a low note. The high note is longer than the low note. The low note is somewhat abrupt. The point, at which the high note brakes to the low note, is what is referred to as the roll over, or drop off by some.  When Calling Wild Turkeys the Roll over and the right length of the notes are the keys to making a realistic yelp. While volume may vary during a call series, the Rhythm, Cadence and Roll over that form the notes are the same. There are tree yelps, excited yelps, assembly yelps, lost yelps, plain yelps…ect. What makes each one different is the Rhythm and Cadence as we previously discussed on the Calling Essentials page. Here we will learn about some of the most basic yelps that will help you introduce old Tom to a load of your No.4’s.

Nobody likes a hen that talks too much so keep calling to a minimum once you get a response. An important point to remember is that just because a Gobbler does not answer you, does not mean he did not hear you. The Wild Turkey’s hearing is very acute. He can pinpoint your exact location from several hundred yards. If a Tom does respond with a Gobble, resist the temptation to keep repeatedly calling to him to make him gobble. There are a couple of reasons for this. First of all he stops moving to gobble. You are slowing his progress if he is on the move. Second, the Hen is supposed to come to the Gobbler. If he is on the roost for example, he is very likely to sit right there and wait for you to come to him. The same holds true if he is on the ground. I am not saying that you call once and then ignore him, but you need to be patient and space out the times between your calls.

Like everything else, when Calling Wild Turkeys there are exceptions to this rule and other calls that will entice him to come in closer after you get a response, but we are speaking in general terms about yelping at this point, so we will address other factors in some of the later lessons. Right now the important thing is to practice is maintaining the Rhythm and Cadence of your yelps, while controlling the volume and intensity.

Tree Yelp: The tree yelp is a series of very soft, somewhat muffled yelps that a Turkey makes from the roost, early in the morning, usually at first light.  It is of course made by both Gobblers and Hens and lets the other Turkey’s know that they are there and all is well. There are usually four to six yelps in a series and the will sometimes incorporate light clucks in the series. The tree yelp usually builds in Volume and Intensity as it’ gets closer to fly-down time and begins to turn into a plain yelp. At fly-down the call turns into a cackle, a valuable call in the hunting call arsenal that we will discuss later.

Lost Yelp: The lost yelp is a call used by both Hens and Gobblers that have been separated from the group for some reason such as a hunter or predator. The lost yelp is usually a long series of twenty or more evenly spaced yelps of the same volume, although the last yelp in the series may decrease in volume almost as if to softly say “please”. This call is an especially good hunting call to use in the fall. In the fall, the name of the game is call…call…call. If you bust up a flock and wait for about a half hour and they begin calling, use this call and get ready for action.

Excited Yelp: The excited yelp is a series of yelps that varies greatly in both volume and intensity and combines clucks (single notes), within a series of yelps of various lengths. The excited yelp can turn often get a response from a gobbler that otherwise has “hush mouth”. It can be a great tool for locating a gobbler on an otherwise quite midmorning or midday hunt.

Kee-Kee Call: The kee-kee call is the call of a young Turkey that has been separated from the brood. While most hunters think of the kee-kee as a fall call, it can also be a call used successfully in the late spring season. While you will hear several different variations of this call in the woods at different times of the spring, summer and fall, for our purpose we are concerned as hunters, with the whistle of late spring and the kee-kee run of late fall. The whistle in the spring is usually a series of about three notes that sounds like a high-pitched whistle with the notes evenly spaced. This is the voice of a young Wild Turkey poult calling to mama hen. It has also been know to elicit a gobble from a nearby Tom and if followed by some yelping from a hen, it may entice the lovesick Tom into taking a closer look. Granted this is not a normal tactic to use but I can assure you it has worked! In the fall the whistle is followed by a yelp as the young Turkey begins to be able to yelp.

As was stated earlier, there are many more versions and variations of the yelp, but these are the most commonly used variations of concern to the hunter when Calling Wild Turkeys.